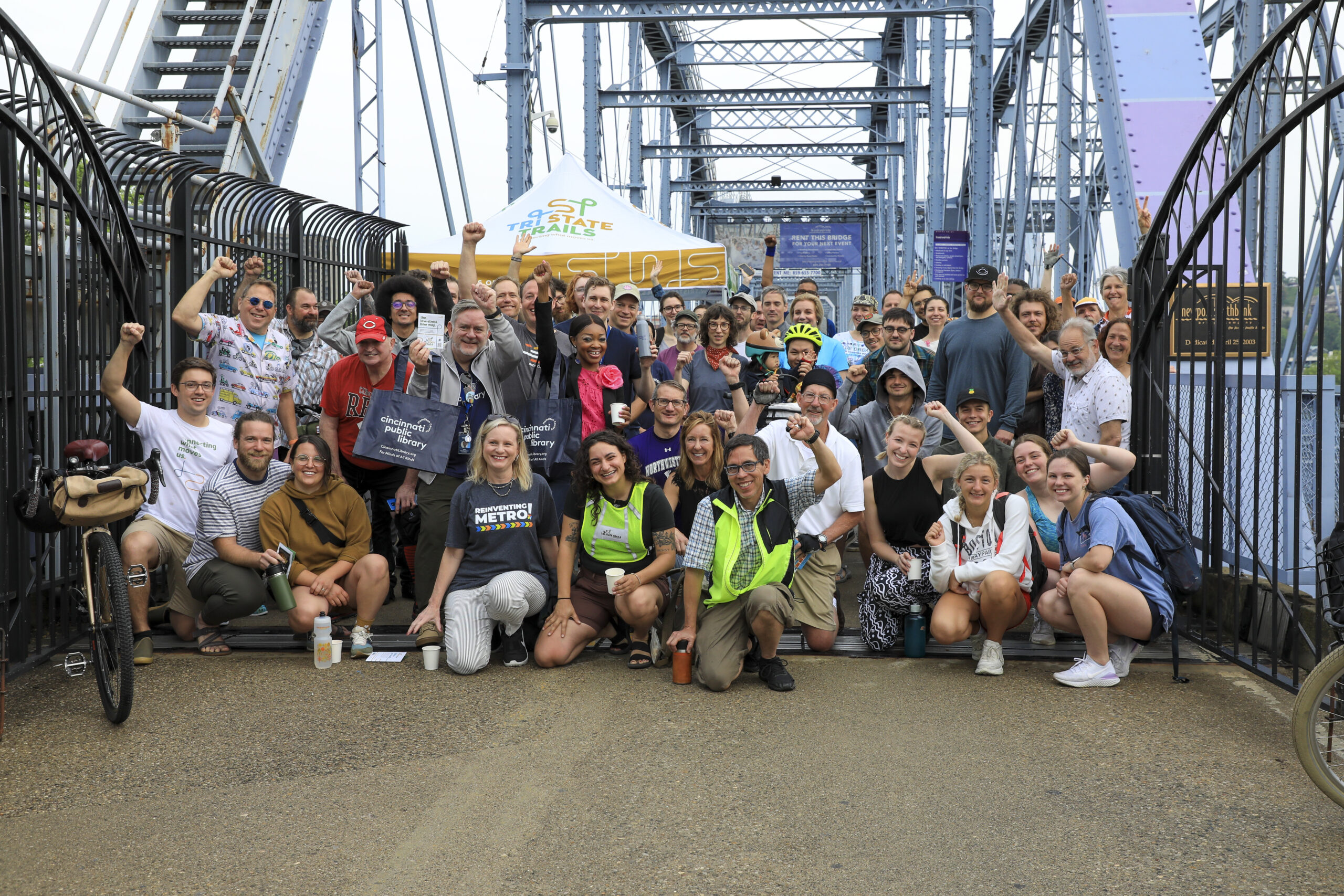 This season we’re feeling the transformative power of a shared vision, one of equity and growth promising to make our region safe, accessible, and multi-modal. With warm hearts, we send sincere thanks to all of our partners, allies, and donors who have helped make 2022 a year to remember.

Flow along as we recount new trail miles, recognize our big hearted volunteers, and celebrate the successes we shared this year.

In January, the CROWN Capital Campaign announced $10 million in private funding to support the first phase of the planned 34-mile urban trail loop around Cincinnati. Procter & Gamble joined Kroger Health and United Dairy Farmers as CROWN Jewel partners in the nonprofit fundraising effort to link the Wasson Way, Little Miami Scenic Trail, and Ohio River Trail. In sum, over 450 businesses, foundations, and individuals have contributed to the CROWN’s fundraising success.

Geared toward an audience of professionals and practitioners working to plan, implement, manage, and improve their trail systems, over 80 participants joined the first Regional Trail & Bikeway Committee meeting via Zoom to hear updates from thirteen projects around the tri-state. Our partners have made significant breakthroughs by improving safety, equity, and quality of life for countless residents while adding to the regional body of trail knowledge.

In March, we launched our Active Transportation Coalition, which aims to share tools and best practices for local community advocates who are taking action for safer, more connected people-powered transportation. The first meeting featured two presentations highlighting community organizations and their (sometimes long!) efforts on behalf of safe active transportation and access to health and recreation.

Through our CROWN Capital Campaign, Tri-State Trails facilitated a donation of 80 bikes to Evanston Academy. As Wasson Way expands to new communities, we’re working to steward the next generation of advocates by addressing access to bikes and trails for kids in the neighborhood. We’re so excited for these new riders and the adventures they’ll have as the CROWN connects to Evanston, Avondale, and Walnut Hills in the next two years.

In May we celebrated National Bike Month by hosting the 13th Annual Breakfast on the Bridge. First-timers, casual riders, and die-hard commuters were all invited to bike to the Purple People Bridge and enjoy free coffee and carbs with a side of cycling camaraderie. We released the second edition of our Low-Stress Bike Map that featured new and improved low-stress routes, updated active transit infrastructure, and a fresh design that makes the map easier to read.

August was a big month – we on-boarded our new team member, Brad Bowers, celebrated our ten year anniversary, and announced plans to become an independent non-profit organization. Tri-State Trails is growing to help more communities expand their plans for trails and bikeways!

Our region is fortunate to have Great Parks of Hamilton County as a leader for trail development in Greater Cincinnati. The Beechmont Bridge opened in September 2022 and now connects the Little Miami Scenic Trail to Lunken Airport as part of our ambitious CROWN Cincinnati 34-mile trail loop project. The residents of Hamilton County will love this connection for generations to come.

In 2022, Tri-State Trails and our partners co-hosted seven Pop-Up Bike Shops that offered free bicycle repair, free safety gear like lights and locks, and information about riding groups and routes to help local people feel safe and ready to use their bikes.

The CROWN Mural was installed through a collaborative partnership between Tri-State Trails, ArtWorks, the Cincinnati Reds, and Duke Energy. Wrapping around the corner of Great American Ball Park at the northeast corner of Joe Nuxhall Way & Mehring Way, the mural spans 165 feet of wall along the Ohio River Trail and Smale Riverfront Park.

The mural was designed by local artist L.D. Nehls to spark excitement, curiosity, and discovery of Cincinnati’s gem landmarks along the CROWN. Featured along Mehring Way are nineteen iconic landmarks that the CROWN trail network will traverse near once complete.

The CROWN Tiara Bench – ​​On October 25, we delivered two gifts to the City of Cincinnati: a $1,115,000 check for Wasson Way Phase 3, 4, and 5, and an actual crown – a tiara-shaped bench along the Ohio River Trail at the mouth of the Licking River. This gem on the CROWN is now an iconic place for a trailside rest or photo, and also a tribute to the many donors and partners who have helped realize this grand vision – a more connected and vibrant region.

In early November we celebrated another 1.3 miles of trail opening along the Ohio River Trail West!  Mayor Aftab Pureval, Councilmember Mark Jeffreys, Cincinnati Recreation Commission, City of Cincy Pedestrian and Bicycle Program, Cincinnati Parks, Great Parks, and River-West cut the ribbon for this new section of trail that runs from Gilday Riverside Park to Fairbanks Avenue in Sedamsville.  This is another critical step forward in building the Ohio River Trail West from Smale Riverfront Park to Shawnee Lookout.  DOTE is currently working on the trail design to link this to another section of the trail in Lower Price Hill.  Slowly but surely, trails are extending to the west side!

On November 10, we welcomed trail planners, land managers, advocates, and community members from across the region to our 7th Tri-State Trails Summit. Over 125 people participated in a full day of presentations, visioning, and collaboration. Our keynote address highlighted the lessons learned and successes in Bentonville, Arkansas, an international trail destination and the home of Walmart.

Over the next three years, we’re anticipating at least 20 new miles to be built! Having a nonprofit advocacy organization like Tri-State Trails enables multi-jurisdictional collaboration and community organizing to thrive.  More local government partners now understand the value of pathways for people-powered movement, and they’re making meaningful, long-term investments in active transportation.

It’s thanks to steadfast support from people like you that we’ve been able to accelerate progress in the last decade. Please consider supporting Tri-State Trails with a tax-deductible year-end gift today. Your donation will help us reach more communities and continue moving projects from ideas to reality.