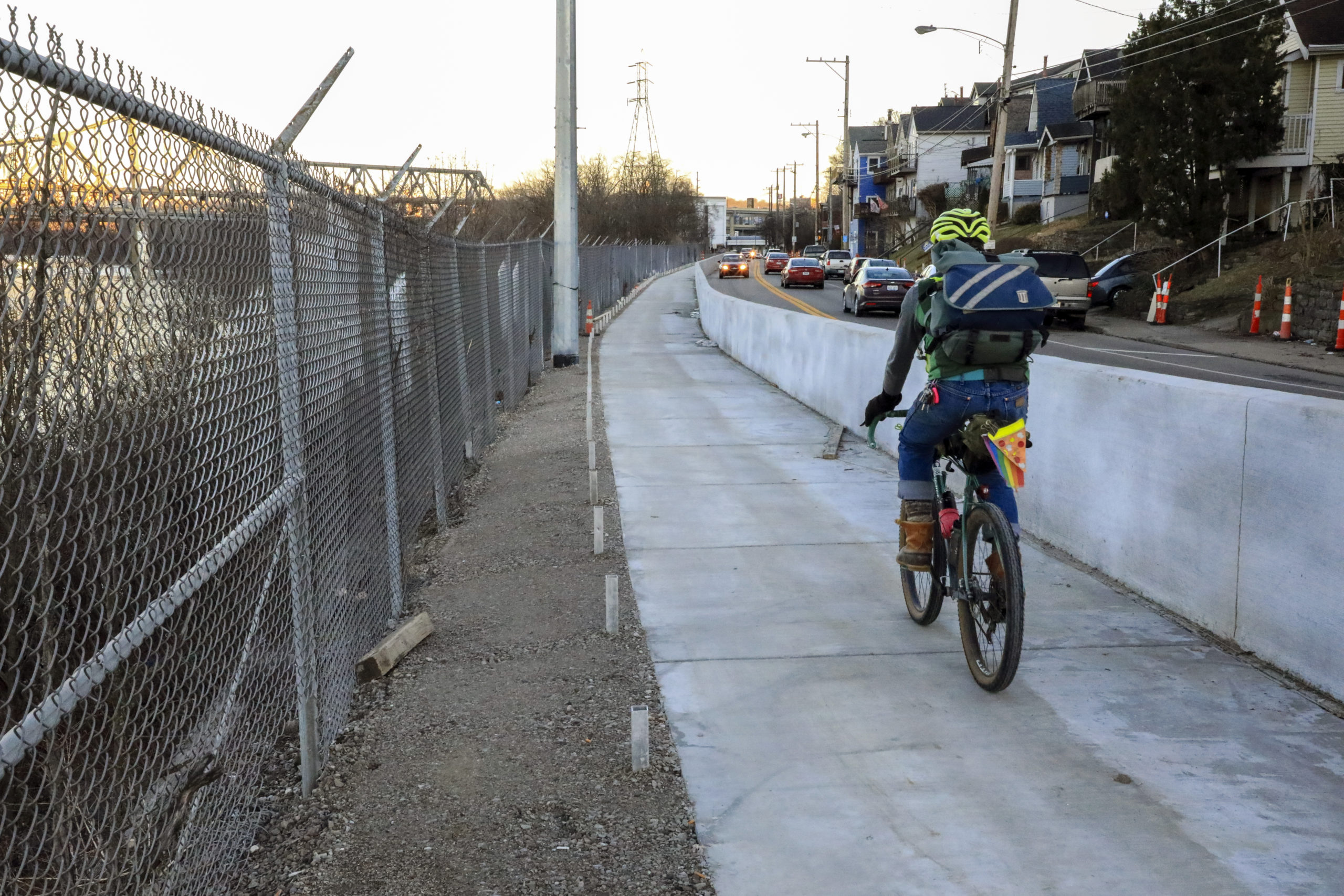 One of our key advocacy priorities in the coming years is to improve connectivity in Northern Kentucky’s urban core for bicycling. Designed to be walkable hundreds of years ago, river cities like Covington, Newport, Bellevue, and Dayton are scattered with dense neighborhoods within close proximity to one another and downtown Cincinnati. Yet today it is intimidating to traverse between Campbell and Kenton counties on a bicycle unless you’re a confident road cyclist.

With much-needed improvements planned for the Fourth Street bridge between Covington and Newport, and the Roebling Suspension Bridge in a constant state of repair, now is the time to reimagine a bikeway network that is safe and welcoming to users of all ages and ability levels. With new funding anticipated to be available to local governments as a part of the recent Infrastructure Investment and Jobs Act, the investments we plan today will impact Northern Kentucky for the next 75 to 100 years.

Tri-State Trails is working to build support for a bikeway plan to complement the CROWN on the Northern Kentucky side of the Ohio River. This builds on our Connect NKY project in Newport in 2019, where we partnered with ReNewport, the City of Newport, and the Devou Good Foundation to pilot bike facilities on several streets in Newport. The goal of this plan is to form a bicycling network that connects residents to Riverfront Commons, Licking River Greenway, and key destinations where people want to go.

For the past 10 years, plans to connect six Northern Kentucky river cities from Ludlow to Fort Thomas along the Ohio River have been led by Southbank Partners, a regional economic development organization. The small but mighty staff also manages the Newport Southbank Bridge Company, the nonprofit entity responsible for the Purple People Bridge.

Covington and Newport have both implemented improvements to the Riverfront Commons trail in recent years. In 2021, the completed Covington Plaza project opened to the public, offering an impressive outdoor entertainment amphitheater with stunning views of the Ohio River. The realigned trail meanders past the Robert Dafford floodwall murals with improved connections from Greenup Street to Madison Avenue.

A new section of the Riverfront Commons trail is under construction at the west end of the Covington floodwall. Previously a gravel path, the newly paved trail will soon extend to Swain Court, separated from busy traffic along Mary Ingles Highway by a new concrete barrier. This leg of the trail was a critical safety improvement to extend through a tough pinch point at Highway Avenue.

Across the Licking River, Newport celebrated the completion of two elevated bridge connections from the Taylor-Southgate Bridge to Newport on the Levee in 2019.  Improvements to the trail are currently being made near General James Taylor Park as a part of the Ovation development.

In Dayton, the city is constructing three sections of the Riverfront Commons trail. Phase I, named Ahrens’ Way Riverfront Trail, was completed in 2019. Phase II and III will add another mile to the trail along the river parallel to Manhattan Boulevard. When finished, this waterfront trail will stretch a mile and a half long complementing the existing walking path that has run on top of the riverfront levee for many years.

Looking back to 2016, the Riverfront Commons Trail was awarded the ‘most ambitious recreational trail project’ of the year at Tri-State Trails’ Regional Trails Summit. Since then, determined river city leaders have made great strides to build on this ambitious project. Now is the time to take connectivity to the next level.