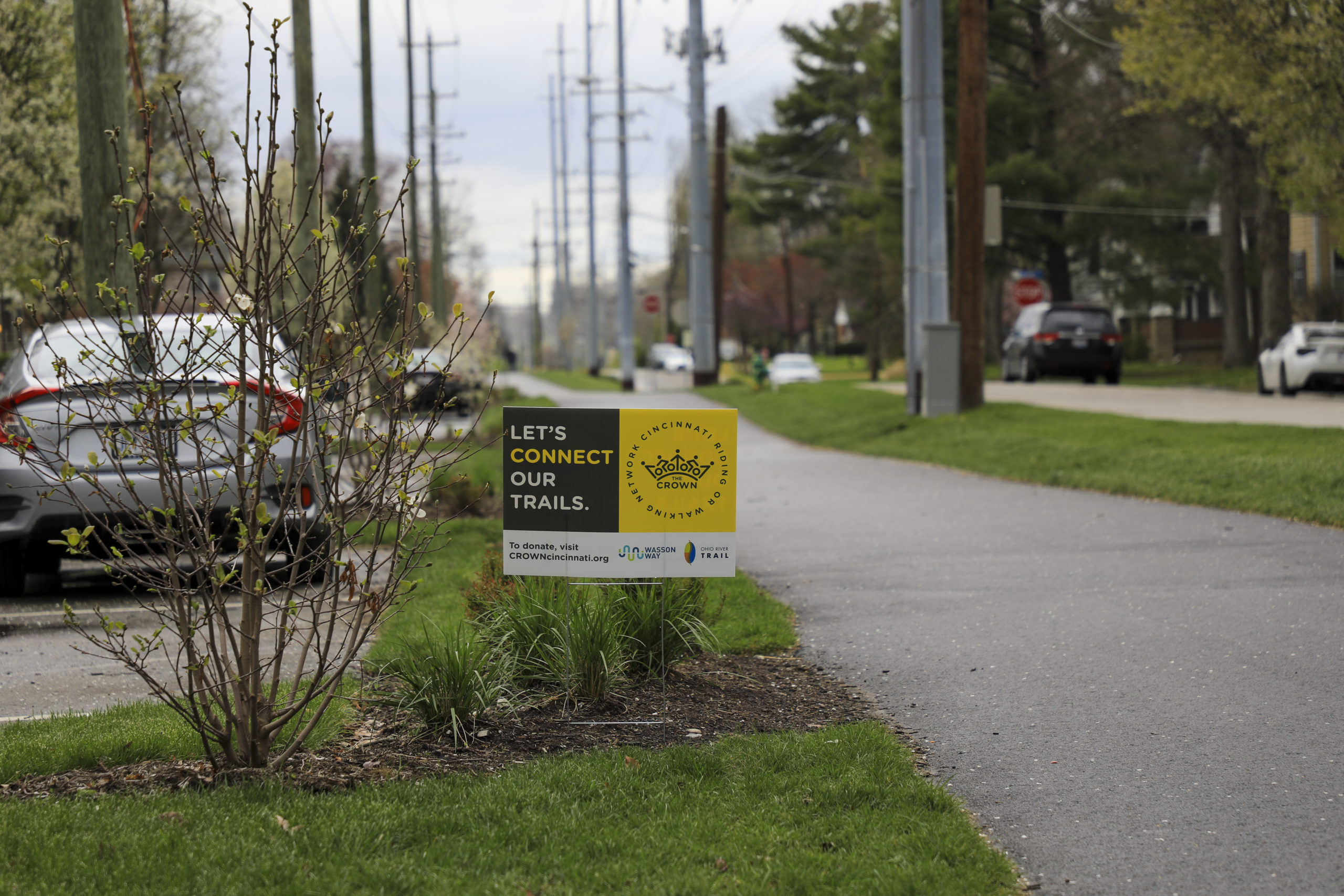 Every year, Tri-State Trails works with local government partners to curate competitive projects to connect and expand our region’s trail and bikeway network. OKI Regional Council of Governments, Greater Cincinnati’s Metropolitan Planning Organization (MPO), distributes federal funding appropriated by Congress to municipalities and townships annually through a competitive application process. In October, OKI announced the 2022 awards, and trails won big with $13.2M in projects funded. Here’s an overview of the paths that we think will make a difference in the biking landscape.

If you’ve been to Fifty West Brewing Company in the past couple years, you’ve probably noticed how the Columbia Connector spurs off the Little Miami Scenic Trail and abruptly ends at Walton Creek.  Great Parks of Hamilton County built this trail back in 2020 with local funds between the park district and Columbia Township.  Thanks to Great Parks’ leadership, and the critical support of the Ohio Department of Transportation (ODOT), who is leading the design through its Eastern Corridor study, the trail will soon connect up to the Mariemont Library.  In October, Great Parks was awarded for a $2.8M Surface Transportation Block Grant (STBG) from OKI to extend the trail 0.6 miles west behind Kroger, across US 50 / Wooster Pike, and terminating at Pocahontas Avenue.  Through our CROWN Capital Campaign, Tri-State Trails will contribute $300,000 toward the match for the grant.

Another grant application is already in the pipeline to extend the trail from Pocahontas Avenue to Miami Avenue. In April, the Village of Mariemont asked for $230,000 from Ohio Department of Natural Resources’ Clean Ohio Trails Fund.  If funded, only a short gap would remain between Miami Avenue and Plainville Road.  The Village is currently preparing a master corridor study to determine the best facility and alignment to make this critical trail connection, which is also supported by $100,000 from the CROWN Capital Campaign.

With the Beechmont Bridge complete, ODOT, Anderson Township, and the City of Cincinnati have been planning ahead to connect the trail to thousands more households in Anderson and Mt. Washington.  In October, OKI awarded another $651,000 from the Transportation Alternatives (TA) grant to extend this highly used trail corridor 0.3 miles from Elstun Road to Ranchvale Drive. The City plans to remove the bike lane, narrow the roadway–which will hopefully calm speeding traffic on Beechmont Avenue–and create a new shared use path.  This will allow for cyclists to ride Beechmont in both directions, separated from vehicular traffic. This builds on a previous $750,000 Transportation Alternatives (TA) grant to connect the Beechmont Bridge 0.4 miles to Elstun Road, which will link Big Ash Brewing and a planned 361-unit, four-story apartment building at the former Skytop Pavilion in 2023.

A little farther north on the trail, the City of Loveland was awarded $282,000 to install a signalized crosswalk on West Loveland Avenue.

The City of Cincinnati is taking a bold step to connect the CROWN trail network into the fabric of the Walnut Hills neighborhood.  OKI awarded $8M in Surface Transportation Block Grant program (STBG) funds to implement a major road calming project that will connect Wasson Way from MLK Drive to downtown.  This project will provide traffic calming benefits along a wide thoroughfare through the walkable Walnut Hills neighborhood, while making a bikeway connection to the Canal Bikeway at Eggleston Avenue.  It will also form a cultural corridor between major institutions and historical sites like the Cincinnati Art Museum, Playhouse in the Park, the new Cincinnati Ballet, Eden Park, the Harriet Beecher Stowe House, and more.

One of our region’s best kept trail secrets is the Great Miami River Trail. For years, there have been several noncontiguous sections in Butler County—but plans are in the works with MetroParks of Butler County and local government partners to close the gaps so you can ride 83 miles from Fairfield to Piqua, Ohio. In 2021, Tri-State Trails organized a feasibility study to understand what it would cost to complete the trail, and now those seeds are bearing fruit. MetroParks of Butler County was just awarded $1.12M to extend the trail south of Middletown to link up to a planned segment in Monroe. When complete, this will add four miles to the trail network, with just 3.1 miles remaining to complete the trail in Butler County!

Last, but certainly not least, Red Bike is getting a glow up… with more electric-assist bicycles! OKI is continuing their steadfast support for Cincinnati’s bike share network by awarding $332,000 that will add 100 new e-bikes to the fleet. You can conquer any hill in this town with a little boost from Red Bike!

In addition to this $13.2M, there’s another $5M+ going into a variety of sidewalk projects around Southwest Ohio and Northern Kentucky. Due to the federal funding process, it will take two to four years for most of these projects to begin construction. Over time, these investments will make a significant impact on residents’ ability to walk and roll safely and conveniently around the tri-state.