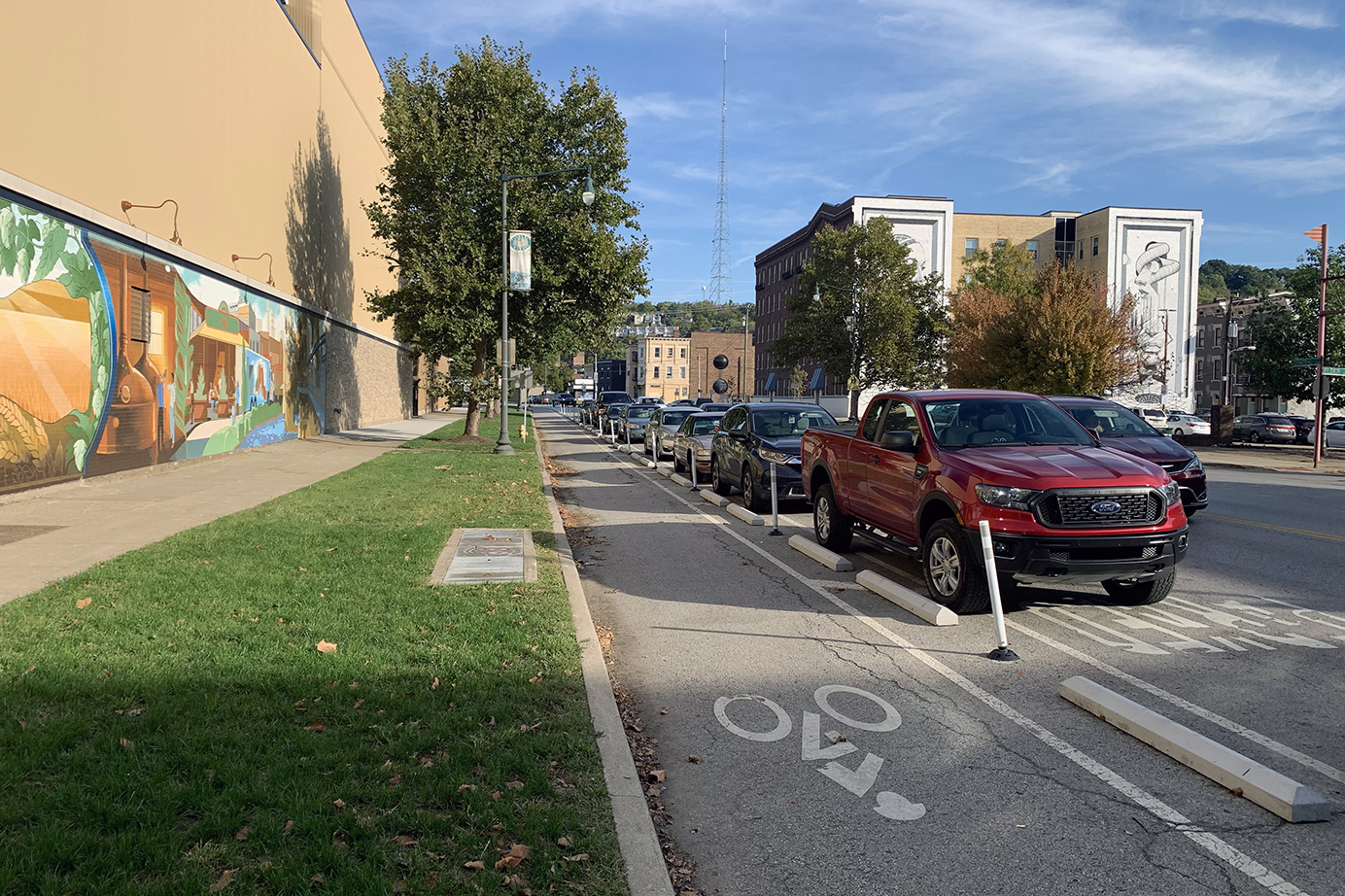 Installed in July 2014, the Central Parkway protected bike lane was the first of its kind in the State of Ohio. Today, this 2.2-mile stretch from Elm Street to Marshall Avenue is one of only two permanent protected bike lanes in the City of Cincinnati–for now.

“Protected bike lane” conveys to people, whether in cars or on bikes, the reassuring feeling of safety. Unique from traditional bike lanes and shared lanes (sharrows), protected bike lanes offer a physical separation from traffic for bicyclists.

Initially, the Central Parkway protected bike lane used plastic pylons and a lane of parked cars in some places to separate cyclists and moving motor vehicle traffic. Over time, the project fell into a state of disrepair, marred with missing pylons and piles of debris, and was regularly criticized as ineffective.

Then, in March 2021, Tri-State Trails partnered with Clifton Town Meeting, Cincinnati Department of Transportation and Engineering (DOTE), and the Devou Good Foundation to install the City’s third protected bike lane along Clifton Avenue from Ludlow Avenue to Straight Street. The route aimed to learn from Central Parkway’s shortcomings by adding more separation from car traffic, this time in the form of concrete parking blocks. Originally designed as a pilot project to repurpose underutilized road space during the pandemic work-from-home phenomenon, the route experienced a consistent increase in ridership after the University of Cincinnati resumed in-person classes in August 2021.

Although the demonstration project was originally planned to be removed in November 2021, City Council has since opted to make the route permanent, thanks to continued private investment from the Devou Good Foundation. In fact, the success of Clifton Avenue then in turn resulted in improvements to Central Parkway and the City’s other existing protected bike lane on Mill Creek Road. New high visibility pylons were installed, and concrete parking blocks followed, to increase safety and prevent illegal parking in the bike lane.

Brian Goubeaux, Senior Engineer for DOTE, works on most of the City’s bicycle facilities and said, “We have seen a significant decrease in parking infractions along Central Parkway, as well as an increase in the perceived level of comfort experienced by users of the protected bike lane.”

Vincent Wilson, who commutes by bicycle five days a week from Finneytown to Downtown shared his experience, “The installation of the concrete curbs have acted as a barrier to entry for vehicles looking for a place to park, and my commutes have encountered far fewer vehicular obstructions. I’ve also noticed that the pylons have remained intact longer; previously they needed to be replaced every couple months after being run over by cars.”

With a new city council eager to make Cincinnati more equitable, safe, and attractive to residents and newcomers alike, the protected bike lane is finally getting the attention it deserves. In late January, Council member Mark Jeffreys secured unanimous council support to extend the Central Parkway path to Ludlow Avenue as a protected bike lane, which changes previously adopted plans to design it as a shared-use path or trail. In its current state, the protected bike lane ends at the Marshall Avenue intersection, forcing cyclists to ride with traffic through the I-75 Hopple interchange traffic. As a protected bike lane, the extension is estimated to save roughly $1M, while still allowing residents of Clifton, CUF, Northside, and Camp Washington to directly access Downtown by bike.

A growing movement of active transportation advocacy and recent political actions show that Cincinnati has learned a lot during its eight years of experience with the Central Parkway protected bike lane. Moving forward, we hope to see an even higher standard be set for future protected bike lanes, with design features like full curb-separation–so that more people can feel safe commuting on two wheels.

It’s not perfect or complete yet, but this hard-fought protected bike lane is a valuable community asset and, when complete, a critical connector for many neighborhoods in all directions.

Take action today by using your voice and sharing your opinion about bikeways in our region. The Cincinnati Bike and Pedestrian Program is updating the 2010 Bicycle Transportation Plan and they’re looking for your input on nine new protected bike lanes in Downtown and the OTR area. Stay tuned for more surveys about other parts of town.