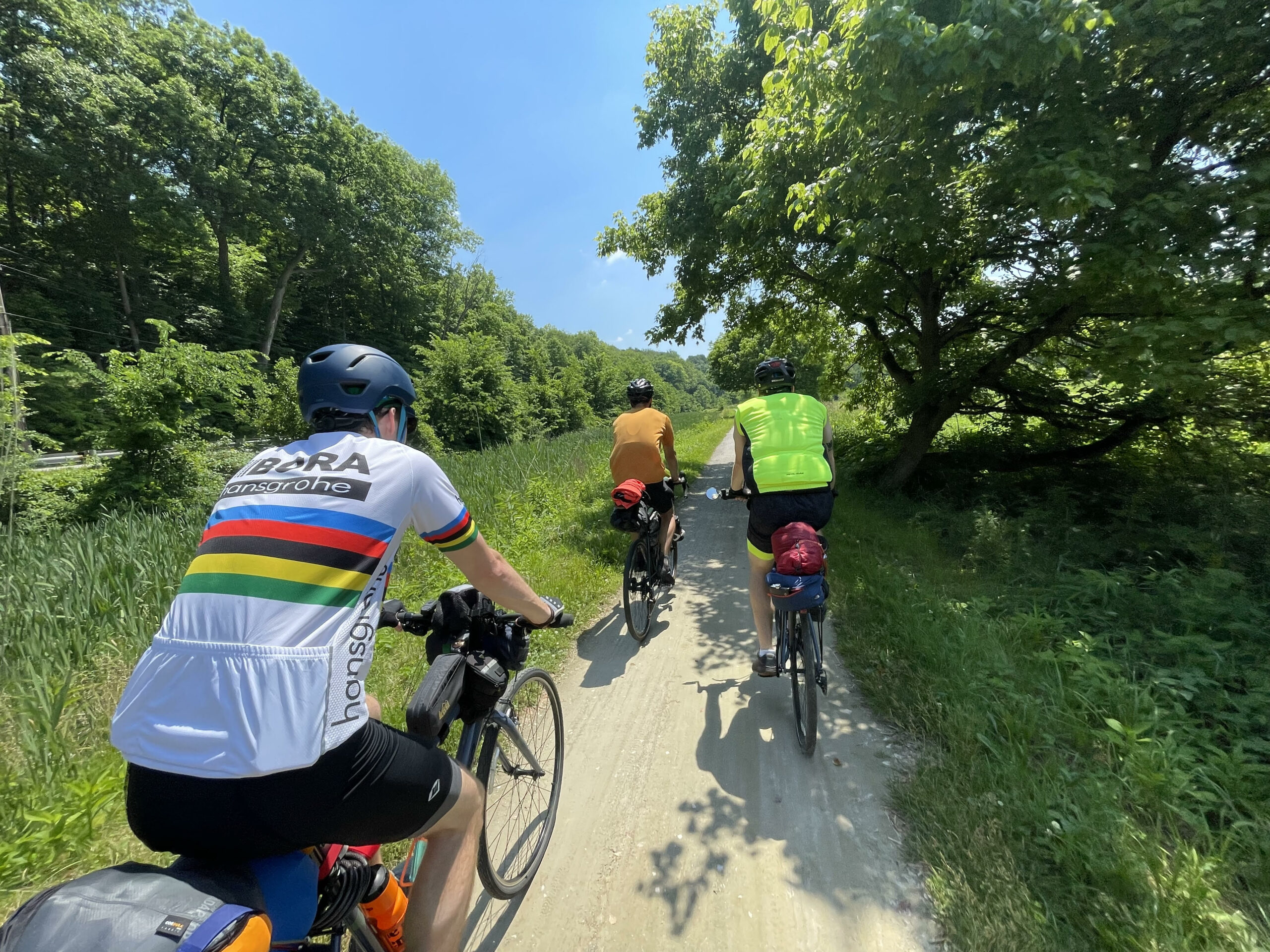 After 20-plus years of discussion and planning, the final link in a 326-mile Ohio to Erie bike trail from north to southern Ohio was completed this year.
While the connection over the Beechmont Levee stands as an important local link, connecting the Little Miami Scenic Trail to the Lunken Airport Trail, and the Ohio River Trail to downtown, this final puzzle piece had a bigger impact, too. This connection, known as the Beechmont Bridge Connector, now completes a safe route to ride from the Ohio River to Lake Erie. Mainly routed on rail trails, historic canal paths, and scenic rivers, this final link along the Beechmont Levee allows walkers and riders a protected path over the Little Miami Scenic River.

Tri-State Trails Project Manager Brad Bowers completed the 326-mile Ohio to Erie Trail in five days in the summer of 2022. Along with three others, they faced thunderstorms, camped on the trail at four different campsites, and wondered why he had not trained more for the challenging experience. Now after traversing from Lake Erie to the Ohio River, he and his fellow riders are part of the 326-Club, a group of those who have mastered the entire Ohio to Erie Trail.
“We had a blast; it’s a fun outdoor experience that is unique to Ohio, and there aren’t many situations like this around the country,” said Bowers of the five-day journey. He and his fellow cyclists wove through charming small towns and bustling cities, riding across historic bridges and alongside old railroad lines that were converted to trails. Some paths followed the Little Miami Scenic River, others followed old towpaths of the Ohio & Erie Canal where remnants of historic canal locks had been preserved, he said. In some areas, the pathway was little more than crushed gravel, in other areas the trail morphed onto country roads where cyclists shared the road.

The first night camping on the trail, a severe thunderstorm and strong winds knocked down trees, blocking the trail in at least 50 locations in the morning. “That definitely spoke to trail maintenance and how important it is to pay attention to tree species along the trail, as well as the health of the trees.”

Being aware of the makeup of the overall trail system due to his job working on bike trails as a former planner with Anderson Township, and now as a Project Manager with Tri-State Trails, Bowers said he was impressed with how communities and jurisdictions worked the trail into their local multi-modal transportation systems. “It was really inspiring to see how the overall system worked within smaller networks,” he said.

“The Ohio to Erie Trail has something to offer for all Ohioans on this amazing tour through the Buckeye State,” Bowers said. “From the Towpath Trail in Cleveland, through the Cuyahoga National Park, to the Kokosing Gap Trail in Mt. Vernon and Mohican Valley Trail in Danville, through Central Ohio Greenways in Columbus, and ultimately to the Little Miami Scenic and Ohio River Trails in southwest Ohio; communities along the way have leveraged the trail system as a catalyst for community and regional connectivity.”
The new Beechmont Bridge Connector was not complete when Bowers and his comrades tackled the 326-mile challenge in late June. Conditions for riding around the connector’s construction, along US 50 and Wooster Pike, were “not ideal,” he said. “The connector is a much safer route, leading you to a more logical part of the Ohio River Trail.”
Would he do it again? Bowers said the journey was invigorating and a true bonding experience with his fellow cyclists, but “next time I would pick a cooler week and train more.”