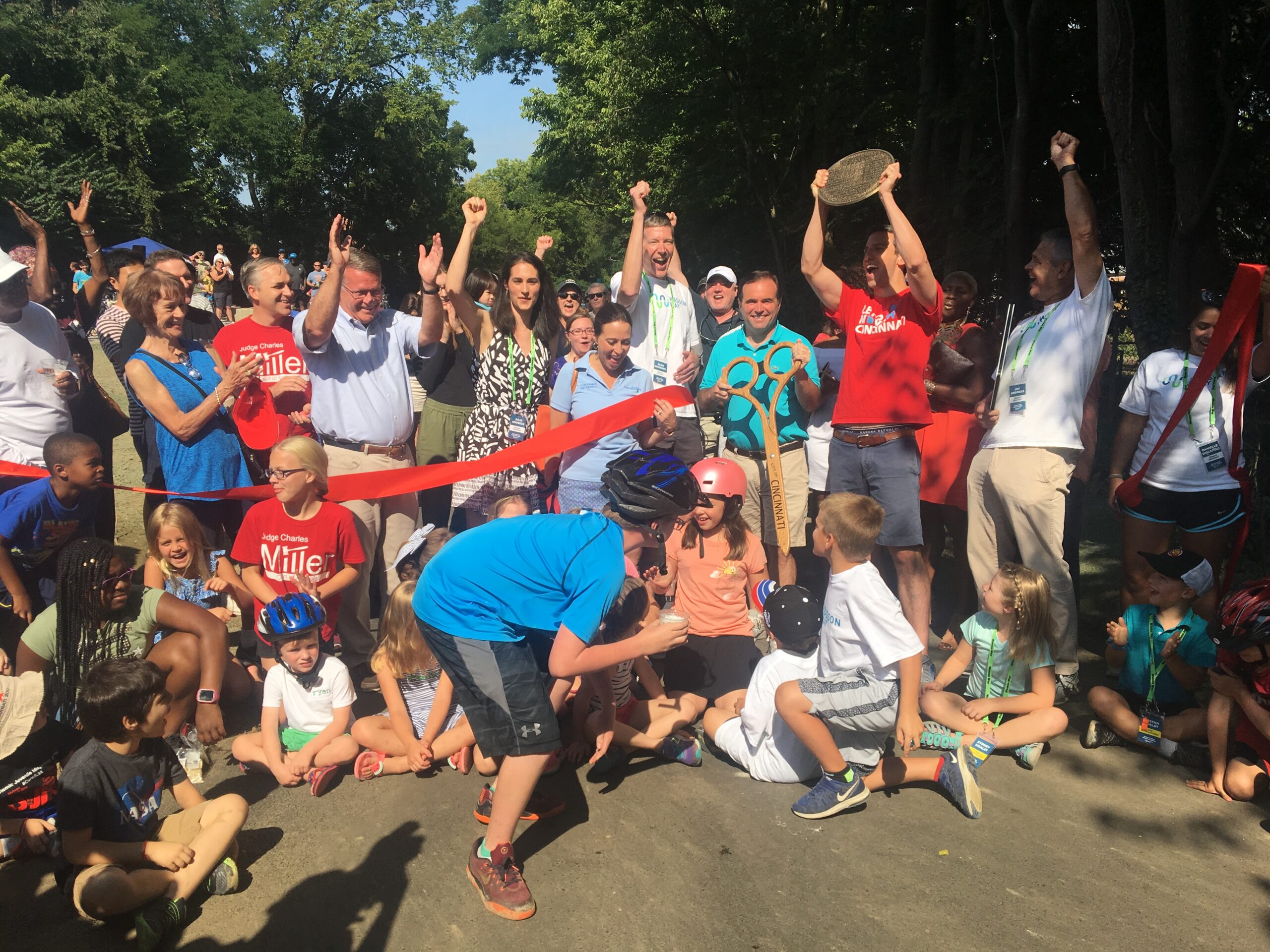 Saturday, July 28 was a historic day for supporters of the Wasson Way bike and pedestrian trail.  Hundreds of supporters came out to celebrate the opening of the first section of trail from Madison Road near Rookwood Commons to Tamarack Avenue behind Withrow High School.  At one point during the event, Councilmember PG Sittenfeld had the whole crowd chanting “Awesome day! Wasson Way!”

As the Director of Tri-State Trails, an initiative of Green Umbrella working to connect and expand the trail system around Greater Cincinnati, I sometimes hear criticisms of Wasson Way from other communities to the tune of “Why aren’t there any trails on the west side?” and “What about Northern Kentucky?”  I’d like to give you a quick taste of the amount of behind the scenes work that has gone into making Wasson Way a reality.

Saturday was the result of over 8 years of relentless work by a committed group of passionate volunteers.  Wasson Way founder Jay Andress saw the potential for a derelict railroad corridor to transform into a vibrant linear park and trail.  He shared that vision with friends, neighbors, and politicians.  They established a nonprofit organization and organized a compelling grassroots campaign to rally support (if you’ve gone anywhere near Hyde Park, surely you’ve seen their “Let’s Build Our Trail” yard signs).  They built relationships with elected officials.  They told their story well to the local news media.  Ultimately, Wasson Way was able to convince the City to pay $11.8 million to buy 4.1 miles of abandoned railroad corridor from Norfolk Southern in 2016, spanning from Xavier University in Evanston to just past Wooster Pike in Fairfax.  All of these steps required political strategy, time, and persistence.  There were several setbacks along the way, including a number of unsuccessful funding proposals, but Wasson Way’s supporters persisted.

Since 2014, Wasson Way has been a primary focus of the City’s attention for grant opportunities.  The City secured roughly $1.8 million dollars in state, federal, and private funds between 2014 and 2017, and has another $750,000 grant pending.  To build out Wasson Way to either end of City-owned right-of-way, it’s estimated to cost upwards of $12 million.  Wasson Way will either need to continue to lobby the City for its increasingly limited capital budget or find generous private funders to leverage future grants and bring the trail to completion.

Compared to the cost of roadway projects, Wasson Way and other investments to make our region friendlier to pedestrians and bikes are a drop in the bucket.  For comparison, ODOT estimates the I-75 Mill Creek Expressway improvements will cost $500 to $600 million when it’s finally complete.  Replacing the Western Hills Viaduct is estimated to cost $335 million.  The Brent Spence Bridge is estimated to cost $2.6 billion to replace, and inflation increases the cost by $75 to $85 million every year!  We can’t drive our way out of this car-dependency problem we’re in.  But if we invest in making our streets more walkable, bikeable, and transit-friendly, collectively, we can change the culture around transportation in our region.

As the demand for limited capital resources becomes increasingly competitive, investments should be prioritized in an equitable fashion.  Living in a community that is walkable and bikeable should not be reserved for our most affluent neighbors.  For this reason, extending Wasson Way through the underserved communities of Avondale, Evanston, and Walnut Hills to the Uptown employment hub poses greater social and economic benefit than the planned connection over expensive rail trestles in Ault Park. Access to a safe biking route could mean the difference between being able to access employment, education, healthy food, and more or being stranded without options.

Wasson Way has been successful because folks like Jay Andress and current board president Sean McGrory keep fighting for their project.  There are many established grassroots groups that have spent years working on projects like the Mill Creek Greenway Trail, Ohio River Trail West, Licking River Greenway Trail, Oasis Trail, Little Duck Creek Trail, and more.  Whether it is a trail or a bike lane, there are numerous opportunities around the tri-state to make cost-effective solutions that will improve resident mobility and neighborhood vitality.  We need more passionate residents to step up and advocate for safer streets for pedestrians and bicyclists in their communities.  Attend a neighborhood council meeting.  Convince your friends, neighbors, and coworkers to become supporters.  Call your local elected officials, and setup a meeting to show them your ideas.  Tri-State Trails can help.  Together, we can build a transportation network that serves people, not just cars.  To get involved and learn more, visit tristatetrails.org.