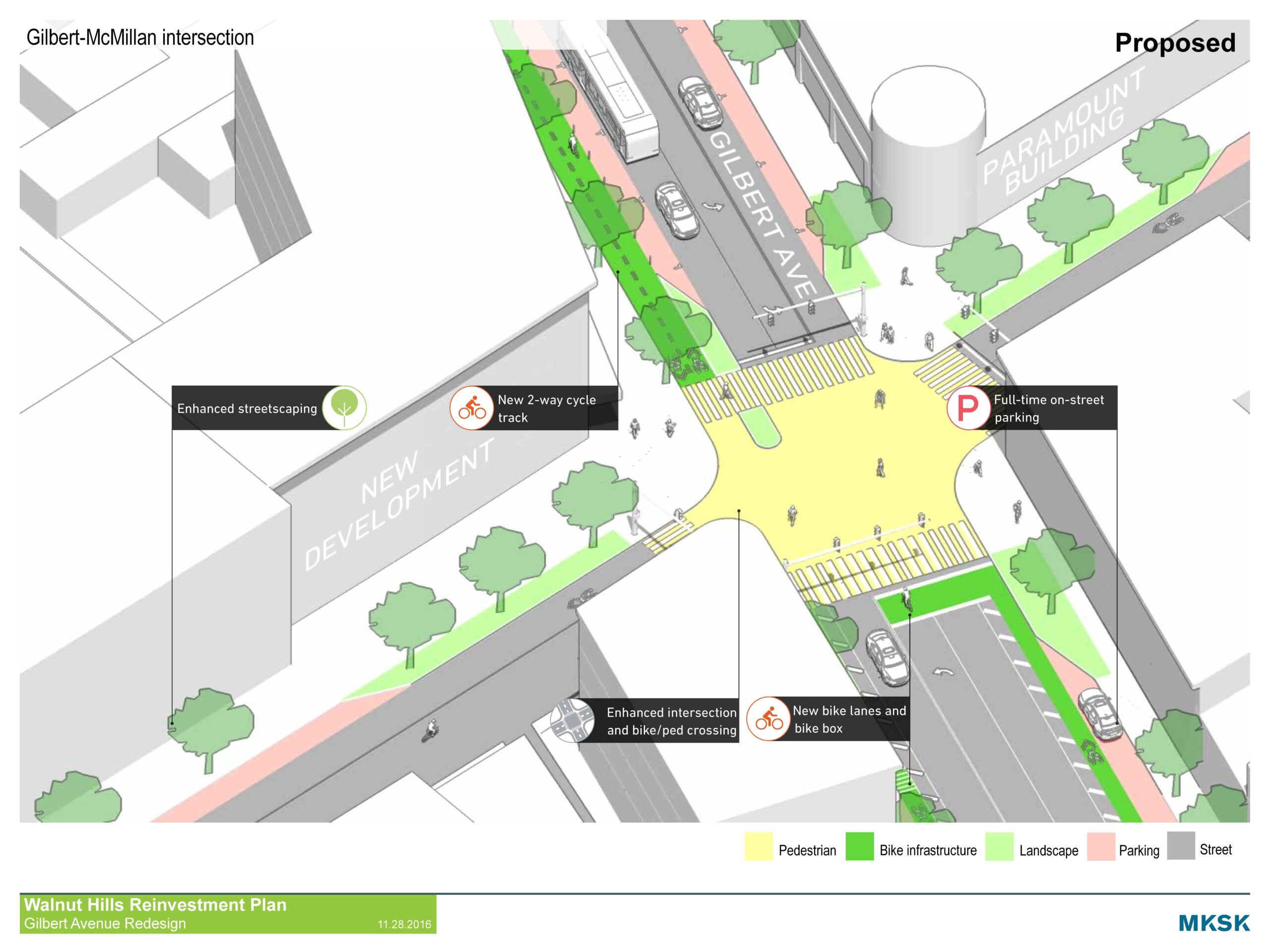 For the past seventy years, city planners and engineers have designed our urban street network to maximize throughput of cars during rush hour. Think about any community around Cincinnati – there’s probably at least one major thoroughfare with four or more lanes going through it. Coupled with a lack of speeding enforcement, this has resulted in more individuals driving dangerously through neighborhoods. Now local leaders are grappling with the negative impacts our driving culture has created for residential areas and business districts that are making the shift to become more walkable, bikeable, and accessible.

Advocates and residents have been speaking up about this for some time. For many years, it has been an uphill battle for community leaders to simply get a cross walk or a stop sign installed in their neighborhood. Traffic engineers have been torn between the maintaining the last half century’s status quo and responding to the changing dynamics in the urban core – where residents are wanting to walk, bike, and roll more safely. Unfortunately, traffic crashes resulting in serious injury and fatalities have been on the rise for the last decade. This is forcing elected officials and decision makers to reevaluate the priorities for our street network.

To tackle this complex issue, many jurisdictions around the world have adopted what’s known as a ‘Complete Streets’ policy. According to Smart Growth America, “Complete Streets are streets for everyone. Complete Streets is an approach to planning, designing, building, operating, and maintaining streets that enables safe access for all people who need to use them, including pedestrians, bicyclists, motorists and transit riders of all ages and abilities.” When enacted and implemented properly, Complete Streets policies mandate engineers to design for all transportation modes, especially the most vulnerable roadway users like pedestrians, bicyclists, individuals using mobility devices, and transit users.

Last month, Complete Streets policies were passed by two critical public entities with significant influence over our roadways: OKI Regional Council of Governments and the City of Cincinnati. OKI is Greater Cincinnati’s Metropolitan Planning Organization (MPO), which is a government entity designated by the federal government to administer the regional transportation planning process and distribute federal transportation funds authorized and appropriated by Congress. Thanks to encouragement from the U.S. Department of Transportation and Federal Highway Administration, OKI adopted a Complete Streets Policy at their November board meeting.

The City of Cincinnati, and other local governments, are frequent recipients of federal grants through OKI to build and maintain transportation infrastructure projects. In partnership with the Sierra Club, Tri-State Trails has advised on a Complete Streets policy to Council’s Climate, Environment, and Infrastructure Committee over the past year.  The policy, adopted on November 30, will require Cincinnati’s Department of Transportation and Engineering to plan for all transportation modes – not just cars – when designing roadway improvements and provide sound justification when it is not feasible to include accommodations for active transportation and transit. DOTE is now required to create internal guidelines for how they will administer the policy. We want to give a special shout out to Councilmembers Mark Jeffreys and Meeka Owens for your leadership to pass this critical piece of legislation.

Transformative change won’t happen over night for our streets. Billions of dollars will be needed to comprehensively improve our roadway network for users of all modes and abilities. If adhered to, these Complete Streets policies should begin incrementally to change the landscape for walking, biking, and transit over time. While it may seem small, this is a big victory for our efforts to connect and expand our trail and bikeway network.

If you’re interested in introducing a Complete Streets policy for your community, we can help! Shoot us an email to learn more.